They are previous ATI1 clients and this, our second innovation project together, is a natural progression which forms part of Daften’s wider plan to continue to increase productivity and efficiency throughout the business.

Mark Weedon, Director at Daften, is constantly looking at ways to modernise the production line. In fact, where some businesses undertake an annual review of their innovation strategy, at Daften it has become part of daily business.

“It’s fair to say the business changes every hour of every day and we don’t just sit down at the end of the year and say we are going to do this and that. There’s always something different to be done”, he said.

To increase productivity and improve the company’s competitiveness, the automation of the manufacturing process has become their main area of focus.

Working with their Business Innovation Advisor, Daften underwent several strategy meetings to outline the parameters of the project and pinpoint the specific stage within the production line in need of innovation.

“Our strategy meetings were really useful for outlining what we were trying to do and we went through how we were going to achieve what we wanted to do with the process of automation, instead of doing it manually”, says Mark.

Deburring, otherwise known as sanding down the parts which have been cast, was highlighted as a very manual, labour intensive and boring task causing bottle-necks in the production line and limiting the growth potential of the business.

To assist, ATI2 were able to award Daften with an innovation grant towards a Robotic Deburring Cell, which would replace this problematic part of their production line. Mark explains:

“The main purpose of the robot was to improve health and safety, to automate the process and make it more efficient so that we can put our people onto other jobs. So we haven’t actually made anyone redundant, we’ve actually taken more people on in the last couple of months because of the increased workload. We’ve got the biggest order book that we have ever had in the history of the company”.

Investment in this new machinery has improved both the speed and consistency of production performance, whilst also reducing the associated health and safety risks of the task, such as Repetitive Strain Injury (RSI) and Hand Arm Vibration Syndrome (HAVS).

Previously, deburring 500 parts could take 2 employees an entire week to complete. Now, 6 parts are completed at once and a more consistent yield is achieved far quicker, helping Daften to fulfil bigger orders.

In addition to this, the number of sanding disks required has also more than halved as even pressure is applied by the robot, which results in less wastage and fiscal savings.

“With robots you get a more consistent yield and that robot will be working from 6am until 5:30pm without any breaks. The other thing we found is that all the parts come out the same and there’s no variation, unlike what you would get with a human. So it’s changed the way we do things”, says Mark.

Employee satisfaction and wellness also increases as a result of the innovation, seeing as those members of staff no longer undertaking sanding have been retrained and redeployed to do less boring jobs within the business. One such example is upskilling employees to learn how to operate and code the Robotic Deburring Cell itself.

Due to onshoring, the pandemic, Brexit and other external factors, the business is in a rapid phase of growth. This innovation was much needed to help speed up production and Daften Die-Casting are more competitive as a result of the investment.

“Everyone that has been involved in the project we’ve got on really well with, whether that be Chris [ATI2 Business Innovation Advisor] or John [ATI2 Innovation Fund Manager]. It’s been a pleasure and not a chore. Even through Covid, we’ve just worked together to get the job done” says Mark.

“I think ATI2 has more than met our expectations just because of the way they run themselves. It’s really different to the other grant providers and it’s an easy process for a dedicated piece of kit. It’s been brilliant” he adds.

The Robotic Deburring Machine is the second robot to be added to Daften’s impressive manufacturing facility and Mark and his team have eyes for more as they look ahead at investing in further automation. Innovation never stands still and Daften are a prime example of a progressive Cornish manufacturer striding ahead to remain competitive and keep up with an increased demand for products manufactured in the UK.

“The best thing to do is to stick at it, think out the box and go off in different directions and keep investing for now” says Mark. 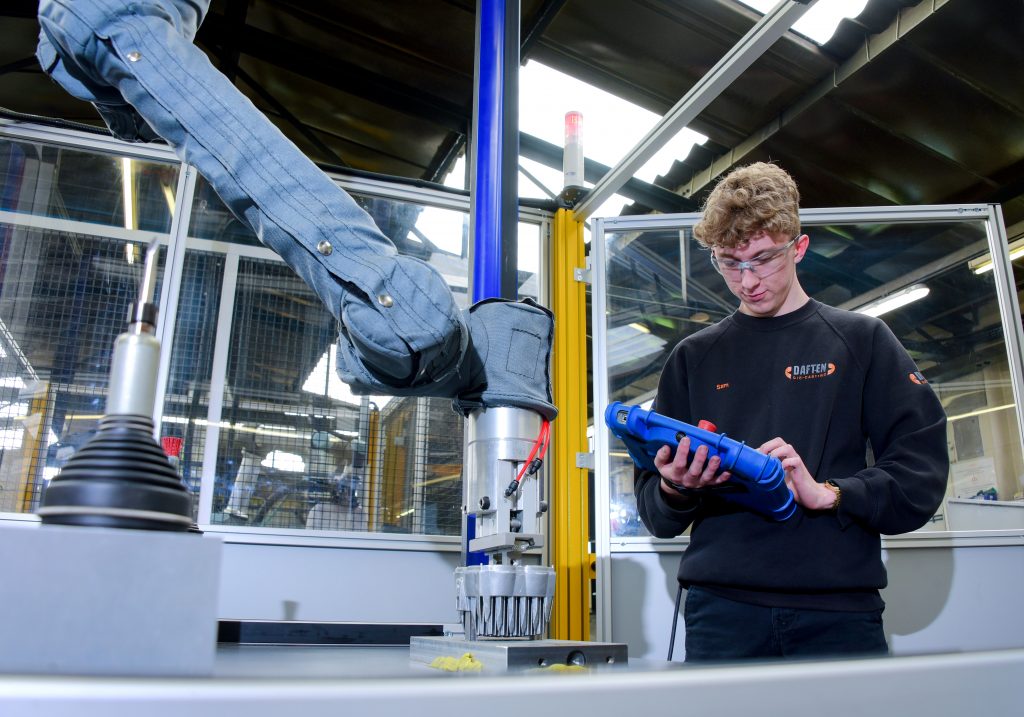 Image of Sam Weedon, Manufacturing Engineer at Daften, with the Robotic Deburring Cell.

"The ATI2 grant gives you that impetus to get on with it and because the process of applying is so fast it allows us to go out and purchase the bits more aggressively" Mark Weedon, Director at Daften Die-Casting